Agriculture in India has a long history dating back to ten thousand years. Today, India ranks second worldwide in farm output. Agriculture and allied sectors like forestry and logging accounted for 16.6% of the GDP in 2007, employed 60% of the total workforce and despite a steady decline of its share in the GDP, is still the largest economic sector and plays a significant role in the overall socio-economic development of India. 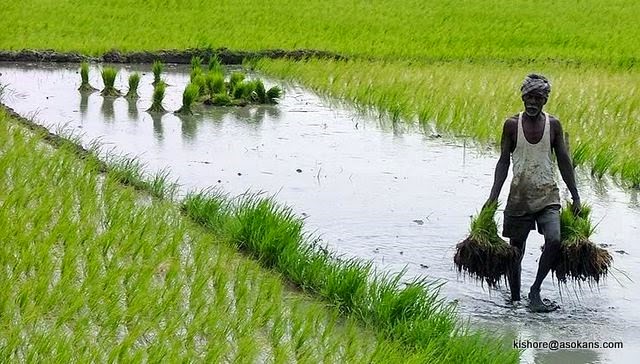 There are 11 types of agriculture in India:

The success of any agriculture is influenced by the availability of proper irrigational facilities. The farmers are still depending heavily on rainfall, specifically monsoon.

Irrigation is a method by which water is supplied to plants from the outside or the artificial source of water where natural precipitation falls short. Irrigationis indispensable to Indian agriculture. In India rainfall is caused by the influence of the summer monsoon; it is seasonal and unpredictable. Often it is unreliable. But agriculture needs a regular supply of water by irrigation

The Methods of Irrigation Practiced in India

Rice is the most important food-grain of India. It is the staple food of the country where rainfall exceeds 100 cm. India ranks second in the production of rice, after China.Climatic conditions of Rice is a crop of the Tropical Monsoon lamed. It requires hot and humid climate. It needs temperature of over 16 degree C to 20 degree C for its cultivation. The temperature must be higher during growing season. It thrives well in plenty of bright sunshine with an average temperature of 27 degree C and water. Rice requires abundant rainfall, ranging from 150 cm to 200 cm. plenty of water should remain standing on the ground up to 5 cm to 10 cm in the rice-field in the earlier part of its growing season. Rice requires flooded fields. Extensive plains and lowlands provide excellent conditions for paddy cultivation. On hills and mountains, rice is grown on terraces. Rice grows on a wide variety of soils. But alluvial loan with sub-soil of clay is ideal. Because the clay like impermeable sub-soil holds water to stand in the fields. Level lands with alluvial soils of the river valley and deltas are ideal for rice cultivation. The rice cultivation requires cheap and abundant labor, as most of the works in rice fields, such as sowing, transplanting and harvesting are done by hand.

Wheat is a rabbi crop in this country. India ranks fourth in the production of wheat in the world. Favorable Geographical Condition for Wheat Cultivation: In India, wheat is a winter crop. Wheat requires a moderate cool climate with moderate rain. In India, it is grown in winter. It needs temperature 10 degree C to 15 degree C for its cultivation. It thrives well in an average temperature of 16-degree C. Warm and sunny weather is essential at the time of ripening. Wheat requires a rainfall of 50 cm to 100 cm during the growing season. Too much rain is injurious to the plant. On irrigated lands, a rainfall of 40 cm to 50 cm is sufficient.

Light rainfall and cloudiness before the grain ripens increase the productivity. Alluvial level plains are ideal for wheat cultivation. Slightly rolling plains are also suitable. Plains should be well drained so that water cannot stand there. Wheat requires fertile alluvial soil. Clay loamy soils or even black cotton soils are suitable. Soil should retain moisture. A certain amount of lime in the soil is beneficial. Labor factors are not as important in the wheat cultivation as in the case of rice. However, labor is essential for the cultivation.

The other requirements of wheat cultivation include

Tea is an important beverage. It is popular drink in India and abroad. Tea is the most important cash crop in India. Favorable Geographical Conditions for Tea Cultivation: The tea plant is essentially a Tropical one. Tea plant needs a hot and wet climate. Temperature: It requires temperature between 10 degree C and 35 degree C; but the areas where the summer temperature averages about 25 degree C are most favorable for its growth. The tea plant needs a rainfall varying between 150 cm and 200 cm. The rainfall should be well distributed throughout the year. Heavy dew and high humidity cause rapid growth of new leaves. Other weather conditions: The tea plant needs a shade from the direct sunlight. For this, in between the bushes special shade- trees are grown. Stagnant water is harmful for tea plant. Hence, mountain and hill slopes are preferred. The tea grown at higher elevation has better flavors and taste. Tea requires fertile soils, rich in nitrogen and iron. Sandy loams are the best for its growth. Soils of the forested land are rich in organic matter. It is an ideal soil. Plenty of cheapis efficient labor is needed; because, picking of leaves and preparing them for manufacture involve a great deal of work to be done by hand; women play a key role in the plucking of two leaves-and-a-bud.

Coffee is the second most popular beverage of India. Its cultivation is confined in South India. Favorable Geographical Conditions for the Cultivation: Coffee is grown on the tropical highlands. Coffee is a typical highland crop of the Tropics. It requires temperature between 16 degree C and 28 degree C all the year round. It is sensitive to cold and frost. Direct sunrays are injurious to the plant; it is often grown in the shades of other trees. The coffee plant needs a rainfall ranging between 125 cm and 200 cm. The rainfall should be well distributed throughout the year. Hilly slopes are suitable for coffee plantation; because, the land can be kept free from water logging. In fact, the mountain slopes at elevations varying from 500-1800 meters in the tropical highlands are the best for its plantation. The coffee plant needs deep loamy soil formed from weathered lava. Coffee soils in India belong to red and later tic soils. They are rich in iron and organic matter. Coffee cultivation needs plenty of labor for planting, seeding transplanting, plucking the coffee cherries, and processing of coffee in the factory. In India, most of the coffee grown, belongs to the Arabic or the Roberta verities. The Arabic a varietyis of superior quality.

Cotton is a leading fibred crop and the most important commercial crop in India. Favorable Geographical Conditions for cotton cultivation: Cotton is essentially a tropical crop; but it is also grown in subtropical regions where there is no frost. Cotton plant requires medium temperature and rainfall. It needs summer temperatures between 20 degree C and 30 Degree C. Abundant sunshine are necessary during the growth of the plant. The plant requires rainfall of 50 cm to 80 cm. In areas of low rainfall, cotton is grown with the help of irrigation.During the period of fruiting, warm days and cool nights are required. Frost is injurious to its growth. well-drained alluvial plains are ideal for cotton production. Slightly sloping plains are also used for its cultivation. Good drainage is essential, because the plant does not tolerate water logging.It thrives best in light alluvial soils, rich in lime or black lava soils. That recur soil of the Deccanis very much suitable for its quality of retaining moisture. Cotton cultivation needs plenty of cheap and co-operative labor, as most of the work in the field is done by hand. It is needed for picking cotton bolls as well as other processes, such as, for ginning, pressing and packing.

Jute is a fibred crop; it is inferior to cotton. It is one of the most important cash crops of eastern India and is popularly known as the ‘golden fibre’ for its colors and high cash value. Favorable Geographical Conditions for Growth: Jute is essentially a Tropical Monsoon crop. Jute needs a hot and humid climate. It grows is India under the following agro-climatic conditions. It grows best in areas having a minimum temperature of 27 degree C during the period of growth. The jute plant requires a rainfall of 170 cm to 250 cm evenly distributed during the growing period. Plenty of clean water is also required after growing period for retting and washing. The plant requires a high relative humidity between 80 and 90 per cent. Jute requires flooded fields. Extensive plains and lowlands provide excellent conditions for jute cultivation. Jute is grown in clay loams. It grows well on alluvial soil found in the flood plains and deltas of rivers. Annual floods of the rivers supply the silt and new alluvium necessary for the plant, as jute is a soil- exhausting crop. Plenty of cheap labor is also essential as most of the work (sowing, weeding, harvesting, retting, washing etc.) is done by hand.