India is a tropical country with a Monsoon type of climate. The word ‘monsoon’ is derived from the Arabic word ‘Mausam’. It means season. It exercises a uniform influence throughout the country [Source].

The Controlling factors of Indian Climate

The Climate Characteristics of India 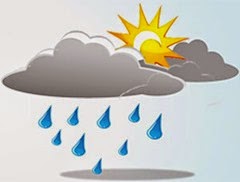 India is a land of the Tropical Monsoon Type of Climate. I The summer is hot and humid; winter is mild and dry. The seasonal reversal in the wind pattern is the most distinctive character of the monsoon. In summer, monsoon winds move from sea to land and bring moisture. In winter, the winds move from land to sea and remain dry. Seasonal heavy rainfall and drought are common features of the monsoon. The rainfall distribution is uneven and largely influenced by the peculiar configuration of the land. The alternate heavy rains with general or partial breaks characterize the summer monsoon. Even the wettest parts of the country do not receive continuous rainfall; because the downpours are intercepted with rainless intervals. Sometimes, monsoons come too early or are considerably delayed and sometime, they retreat too early. The amount of rainfall, which occurs, does not remain the same in each year. It varies. Sometimes, scanty rainfall with short summer monsoon causes extensive drought. Thus, for the whimsical features of the monsoon India often suffers from the hazards of drought and flood.Seasons of India

There are regional variations in the length of period of these seasons in India. These differences are significant as we move from the south towards the north.

The Southwest monsoon, generally, blows from June to September. They bring rain. For this, a season is known as Rainy Seasons. The monsoon rains are responsible for agricultural success in India. During summer, the maximum isolation is received on the Tropic of Cancer and its vicinity. Consequently, low-pressure center develops over much of the North-west India and central Asia. A comparatively high-pressure condition prevails on the Indian Ocean in the south. This result in the movement of winds is from the sea to the land. Due to the rotation of the earth, these winds deflect to the right in the northern hemisphere (according to Ferrell’s Law) and blow Southwesterly. Thus the condition of the North-Eastern Trade is disturbed and their place is occupied by the Southwest monsoons. Thus the velocity of the Southwest monsoons increases considerably. About middle of June, the Southwest monsoon ‘burst’ with storm and rain. The advent of the rain-bearing monsoon is called the Monsoon Burst’. The winds blow steadily and by the July the whole of the country comes under its influence. As India is of peninsular shape.

The Southwest monsoon from the Arabian Sea strikes the Western Ghats. It causes heavy rains on western side of the mountain. The amount of rainfall ranges ‘between’ 200 to 400 cm. After crossing the Western Ghats, the monsoon winds lose most of their moisture. When they reach the Deccan plateau (on the leeward side), they give little rain (about 60 cm). These regions remain as rain-shadow regions. A part of these winds enters through the Narmada and Tapti valley. They offer a considerable amount of rainfall to these basins. Rainfall also occurs in Chhotanagpur regions.The influence of the Arabian Sea branch scarcely reaches north of the Gulf of Khambat. Towards the further north, a part of these winds passes over the desert of Rajasthan and goes straight right to the foothills of the Himalayas without giving any rainfall. It is because there is no mountain to obstruct the winds. The Aravalli Range lays almost parallel to the direction of the wind. It gives no obstruction and that is why no rainfall occurs.

The Bay of Bengal Current

It passes over the Ganga-Brahmaputra Delta and strikes the Eastern Himalayas and Sub- Himalayas ranges of the North-Western Hilly Regions. A branch of the Arabian Sea current, which crosses the Central India, also meets the Bay of Bengal current here. Therefore, a heavy rainfall occurs in the north- eastern hilly regions. The highest rainfall (1,250 cm approx.) is found on the southern slope of the Garo- Khasi- Jaintia hills in Meghalaya plateau at Mousinram near Cheerapunji. It records the highest rainfall in the world. The monsoon winds cannot cross the high Himalayas. So a part of these winds is deflected towards the Indo- Ganga plains, following the line of the mountain arc. The rainfall spreads westwards along the southern slopes of the Himalayas in decreasing quantities up to Kashmir. Arrived at the western Rajasthan the winds fail to produce any rainfall. Thus the western Rajasthan remains almost rainless (Thar Desert).

By the end of September or early October, the intensity of low pressure and rainfall becomes much less. Conditions, which prevailed over northwestern part and central part of India, begin to decrease. Consequently, the south- west monsoon winds begin to retreat. They leave Punjab plain by mid-September, the Ganga delta by the late October and the south by early November. This act of the monsoon winds is known as Retreat of Monsoon.During this season, as the Southwest monsoon winds retest, the north- east monsoon winds approach, and, sometimes, they collide, resulting in the formation of cyclones, particularly on the coastal strip of the Bay of Bengal. In West Bengal these Cyclones are known as ‘Aswiner Jhar’.

The cold weather season starts in early December and continues till February. During this season, the sun’s rays do not fall vertically in any part of the country, because of the southerly movement of the sun. The temperature decreases from south to north. The mean January day temperature in Chennai is about 24 degree C while in the northern plain it is about 8 degree to 15 degree C. The days are warm and nights are cold. Hence diurnal range of temperature is high. The snowfall is common in some parts of the Himalayan range. The high-pressure area develops over the plains in the Northwest regions. The winds blow from high-pressure area to the low-pressure area over the south. These winds are called winter monsoons. They blow from Northeast direction. Generally, a fair weather prevails. It is characterized by clear skies, high pressure, low humidity and rainless days. However, this fine weather is occasionally disturbed by the cyclonic depressions visiting from the Mediterranean Sea. They bring rain in areas of Jammu & Kashmir,

Himachal Pradesh, Haryana, Rajasthan and U.P. Sometimes, they invade up to West Bengal. The amount of rainfall decreases towards the east. They also cause snowfall in Northwestern Himalayas (J & K, H.P. and U.P.). As these west-winds come from the west, they are popularly known as ‘Western Disturbances’. The precipitation offered by these winds is of great importance for Rabi Crops, especially wheat. The average precipitation varies from 20 m.m. to 50 m.m. Winter rainfalls also occur along the coastal strip of Tamil Nadu. The Northeast monsoon winds absorb moisture while blowing over the Bay of Bengal before crossing the coast. These winds strike against the Eastern Ghats and cause rainfall on Coromandel Coast.