In the Southern Hemisphere, the entire continent of Antarctica has a permanent ice cap.

Greenland is the largest area of Ice Cap in the Northern Hemisphere.The Tundra region covers the coastal strips of the Arctic Ocean in North America, Europe and Asia. The main areas are the coastal strips of Canada and Alaska and the coastal strip of Greenland. In Europe, the Tundra covers Iceland, the northern coast of Scandinavia and small islands adjoining the coast. The Arctic coast of the Russian Commonwealth has a narrow strip of Tundra.The Tundra region is also found in high mountain regions immediately below the region of perpetual snow and above the zone of Coniferous Forest.

This is called the Alpine Tundra because the vegetation of this region resembles the Polar Tundra region. 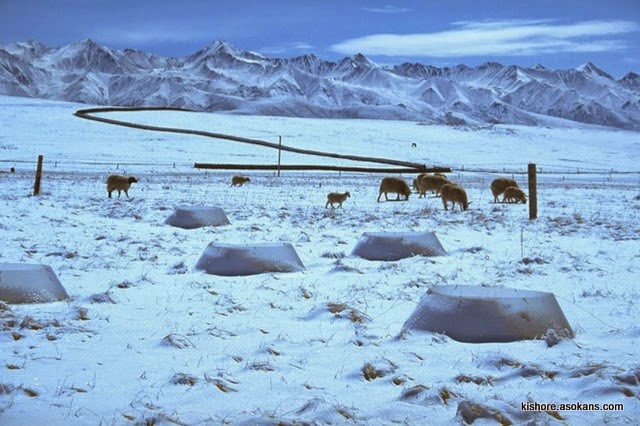 The Tundra region is characterized by a short cool summer and a long cold winter. During summer the sun never sets for two to three months. The sun remains above the horizon at a low angle. The sun’s rays are not effective in heating the atmosphere owing to the low angle of incidence. Much of the solar radiation is reflected by snow cover on the land. And used up in melting the snow cover.

The winter season is marked by extreme cold – The mean temperature of the coldest month is about -30 degree centigrade. In some places a minimum temperature of -60 degree centigrade has been recorded in winter. Though the sun never rises above the horizon for several months, there is continuous twilight for many weeks when the sun is less than 18 degree below the horizon. There is also the reflection of the light from the heavenly bodies of the sky and from the aurora borealis. There are only a few weeks of continuous darkness in the Tundra region.

The sub soil is permanently frozen – There are strong blizzards with strong cold winds blowing with a velocity of more than 100 km per hour. Powdery masses of snow are blown up during such blizzards causing hazards to people and animals inhabiting the region. Fogs occur commonly in the coastal region owing to the warm air over the oceans getting cooled by contact with cold air from the land. Such coastal fogs restrict visibility to a few metres.

The polar Tundra region is often described as a cold desert because the annual rainfall is less than 25 cm. the capacity of cold air to retain water vapor is limited. Rainfall has a summer maximum because during this season, the westerlies move pole ward. Rainfall is of cyclonic origin owing to the ascent of warm air from the south over the cold air from the north. The effect of cyclones is felt to a greater extent in the coastal regions.

Such areas can get an annual rainfall of more than 25 cm. the coastal regions may have a maximum rainfall in autumn or winter. Precipitation occurs in the form of rainfall, snowfall or sleet which is a mixture of both rain and snow. In these regions, the thick layer of snow and ice on the land represents an accumulation of snow which has fallen for many years. Only a thin surface layer of snow gets melted during the short summer season.

The Tundra stands out as a treeless region compared to the Coniferous region bordering it to the south. Trees do not grow in a region having a temperature of less than 10 degree centigrade throughout the year. The growing season is too short as the snow covers the land for nearly nine months during the year.

Even during the short summer season, melting of snow affects only the top few centimeters of soil. As the sub soil is frozen, there is no drainage and water stagnates to form swamps and marshes on the ground. During this season a large variety of grasses and flowering plants come to life. This is called the grassy Tundra. Common types of plants are sedges, mosses, lichens and grasses. Poppies, lilies, buttercups and violets are some of the flowering plants which make the vegetation appear colorful. These plants survive only during the short summer and complete their life cycle. Their seeds remain below the snow during the long winter and sprout again after the melting of snow.

In the Alpine Tundra region such grass covered slopes are called the Alpine meadows.In the southern part of the Tundra region, Arctic scrub vegetation is found. Short stunted trees such as birches, willows, junipers and alders may be seen. Such scrub vegetation occurs more often in coastal regions sheltered from strong winds. Berry bearing bushes may also be found. This type of region is called the Bush Tundra. The plants are xerophytes in nature because water is not available to the roots when the soil remains frozen.

The Tundra region becomes bustling with activity during the short summer season when there is a carpet of grasses and other vegetation covering the ground. Reindeer caribou and musk-ox are common herbivores which feed on the plants. Smaller herbivores like rodents are also commonly found. Due to the melting of snow during summer, water stagnates in depressions to form bogs and swamps called muskegs. The stagnation of water provides a breeding ground for mosquitoes and other insects. A large number of birds also migrate to the Tundra region during the short summer season.

These birds feed on the insects. Penguins are typical flightless birds found in Antarctica.Owls, foxes, ermines and lynxes are the common carnivores. Polar bears, wolves and lemmings are also found. The animals are adapted to the cold conditions. They have thick fat layers below the skin to protect them from the cold. Fat also serves as a food reserve during the winter. The skins of animals are covered with a thick coat of hair or fur which also protects them from the cold.With the onset of winter, the grass cover disappears and the animals and birds migrate southwards to the warmer regions in search of food. Some animals hibernate during the winter and conserve their energy.The seas are full of marine life. Salmon and cod are the common varieties of fish.

Seal, walrus and whales are typical of the seas in the Polar Regions. The reindeer is the most important animal of the Tundra region. It is adapted to live under cold conditions. Its large flat hoofs enable it to move fast on the snow. It can also swim and cross rivers. The reindeer provides meat and milk for the people. The skins of the animals are used for making clothes and tents. Reindeers are reared by the inhabitants of the Tundra region.

The Tundra region has an unfavorable environment for human settlement. The total population of the Tundra region may not exceed 100,000 persons. The inhabitants are the Eskimos of North America, the Lapps of Scandinavia, the Samoyeds of Siberia, the Yakuts of the Lena basin, the Koryaks and Chickchis of north eastern erstwhile USSR.

The region is too cold for cultivation of any crops. People have to depend on the bounties of nature to provide them their essential needs of food. People lead a nomadic life according to the availability of food. They migrate with their animals in search of pastures. They also hunt animals and fishes in the seas and rivers. All their needs are met from the local environment. In some areas, the modes of life of the people have modified by external contacts. They live in wooden houses with electricity, cooking gas and other facilities. The discovery of minerals has led to the construction of roads and airports in the region.

There are also glass houses where some vegetables are grown during the summer season. People are encouraged to lead a settled life. Reindeer farms have been established. Other fur bearing animals are also reared systematically. This has reduced indiscriminate hunting of animals as in the past. People get food from other regions and no longer depend on hunting and fishing. The modes of lives of the Eskimos are described below as a case study.

The Eskimos live in the Tundra region of Alaska, Canada and Greenland.Their total number is estimated at about 25,000. Many of them prefer to live near the coast. Their number decreases inland away from the coast. Hunting and trapping of animals are their traditional occupations. In the coastal regions fishing is also practiced. They lead a nomadic life moving their herds of animals in search of pasture.Eskimos are short and sturdy people with yellow skin colour. They appear to be of Mongolian origin as regards their physical features. They live in small groups of a few families.

Their food consists of animal meat from reindeer, seal, walrus and other animals. They also eat fish. They do not eat any vegetarian food as it is locally not available. They consume large quantities of fat or blubber in order to withstand the cold. They also consume raw meat or frozen meat. The word “Eskimo” literally means eater of raw meat. Besides meat, they drink milk provided by the reindeer.

They wear animal skins for their dresses. Inner garments are also made of leather. Seal skins are also used for making the clothes. They have hoods over their heads and wear gloves on their hands. They have animal skin socks and shoes. With such thick layers of clothing they are able to keep their body warm even when the air temperature is -30 degree centigrade. Men and women wear the same kind of dress.

During the summer season, they live in portable tents made of animal skins. Such tents enable them to migrate freely from one place to another. During the winter season they live in igloos made of blocks of ice. Igloos have narrow and low entrances in order to keep the interior warm. Some of them also live in the huts.

The Eskimos use simple tools for hunting and fishing. They use the bows and the arrows, axes, spears and harpoons. They set traps for catching the animals. Their mode of transport consists of the sledges drawn by the reindeer or the polar dogs. Sledges are used for travelling on the snow covered land during the winter season. They also wear skin and snow shoes for traveling on the snow. Polar dogs called the huskies have the strength and the stamina to drag sledges over long distances.

In the coastal areas and the rivers the Eskimos use small canoes called the kayaks. They are made of a wooden frame and covered by seal skin on the outside. Only one or two persons can travel in the kayak. Larger boats are called the umiyaks and they are used for moving from one place to another in small groups. The boats are used for fishing in the coastal waters and in the rivers during the summer.

Animals provide all the needs of the Eskimos. Besides providing food and clothing, animal bones are use for making tools and animal fat is used for lighting lamps inside their houses. Animal skins and fats are sold to earn money. Eskimos used to lead a secluded life in perfect harmony with their harsh environment. They lead a contended life because all their essential needs are met from their environment.

External contacts have altered the traditional lifestyle of the Eskimos. They use fire-arms like rifles for hunting the animals. They use modern boats fitted with engines. They live in wooden houses with all modern facilities.

They send their children to schools and even to colleges. Some of them have settled permanently and rear reindeer and other fur bearing animals. They obtain all kinds of tinned food from stores in the nearest town.