When highly energetic electrons are made to strike a metal target, electromagnetic radiation comes out. A large part of this radiation has wavelength of the order of 0.1 nm ( 1 A) and is known as X-ray. X-ray was discovered by the German physicist W.c. Roentgen in 1895. He found that photographic film wrapped light-tight in black paper became exposed when placed near a cathode-ray tube. He concluded that some invisible radiation was coming from the cathode-ray tube which penetrated the black paper to affect the photographic plate. He named this radiation as X-ray because its nature and properties could not be known at that time. In mathematics, we generally use the symbol x for unknown quantities. However, after some calculation we finally get the value of this unknown x. Similarly, we now know about the nature and properties of X-rays. A device used to produce X-rays is generally called an X-ray tube. Figure shows a schematic diagram of such a device. This was originally designed by Coolidge and is known as Coolidge tube to produce X-rays. A filament F and a metallic target T are fixed in an evacuated glass chamber C. The filament is heated electrically and emits electrons by thermionic emission. A constant potential difference of several kilovolts is maintained between the filament and the emitted by the filament are, therefore, accelerated by target using a DC power supply so that the target is at a higher potential than the filament. The electrons the electric field set up between the filament and the target and hit the target with a very high speed. These electrons are stopped by the target and in the process X-rays are emitted. These X-rays are brought out of the tube through a window W made of thin mica or mylar or some such material which does not absorb X-rays appreciably. In the process, large amount of heat is developed, and thus an arrangement is provided to cool down the tube continuously by running water. The exact design of the X-ray tube depends on the type of use for which these X-rays are required. 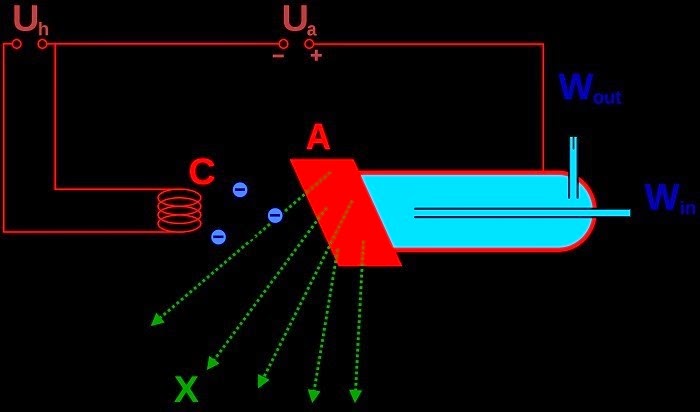 If the X-rays coming from a Coolidge tube are examined for the wavelengths present, and the intensity of different wavelength components are measured, we obtain a plot of the nature shown in figure. We see that there is a minimum wavelength below which no X-ray is emitted. This is called the cutoff wavelength or the threshold wavelength. The X-rays emitted can be clearly divided in two categories. At certain sharply defined wavelengths, the intensity of X-rays is very large as marked Ka, K in figure. These X-rays are known as characteristic X-rays. At other wavelengths the intensity varies gradually and these X-rays are called continuous X-rays. Let us examine the origin of these two types of X-rays. Suppose, the potential difference applied between the target and the filament is V and electrons are emitted by the filament with negligible speed. The electrons are accelerated in their journey from the filament to the target. The kinetic energy of an electron when it hits the target is
EQUATION: K= e V
As the electron enters into the target material, it readily loses its kinetic energy and is brought to rest inside the metal. The electron before finally being stopped, makes several collisions with the atoms in the target. At each collision, one of the following two processes may occur:

The fraction of kinetic energy appearing as the energy of a photon varies from collision to collision. In a certain collision, the electron may lose its entire kinetic energy to bring out a photon or it may not create a photon at all. Thus, the energy of the photon created can be anything between 0 and eV depending on how much energy has already been lost to the target and what fraction of the available energy is converted into the photon. The maximum energy of such a photon can be E = eV when the electron converts all its kinetic energy into a photon in the first encounter itself. We see that the cutoff wavelength X depends only on the accelerating voltage V applied between the target and the filament. It does not depend on the material of the target. We shall now discuss what happens if the electron knocks out an inner electron from the atom with which it collides. The electrons in an atom occupy different quantum states characterized by the quantum numbers n, 1, in m The energy primarily depends on the principal quantum number n. The two electrons corresponding to n = 1 are said to be in K shell, those corresponding to n = 2 are in L shell etc. Suppose, the incident electron knocks out an electron from the K shell. This will create a vacancy in the K shell in the sense that now there is only one electron with n = 1, whereas two could be accommodated by Pauli exclusion principle. An electron from a higher energy state may make a transition to this vacant state.

Moseley’s experiments (1913-4914) on characteristic X played a very important role in developing the concept of atomic number. In those days, the elements were arranged in periodic table in the increasing order of atomic weight. The periodicity in chemical properties of elements was brought out from such arrangement, though some anomalies were present. Bohr had proposed his model in the same year and there was no concept of distribution of electrons in different energy levels. During those days, Moseley measured the frequencies of characteristic X-rays from a large number of elements and plotted the square root of the frequency against its position number in the periodic table. He discovered that the plot is very close to a straight line. A portion of Moseley’s plot is shown in figure where vivid of K X-rays is plotted against the position number. From this linear, relation, Moseley concluded that there must be a fundamental property of the atom which increases by regular steps as one moves from one element to the other. This quantity was later identified to be the number of protons in the nucleus and was referred to as the atomic number. Thus, elements should be arranged in the ascending order of atomic number and not of atomic weight. This removed several discrepancies existing in the periodic table. For example, nickel has atomic weight 587 whereas the atomic weight of cobalt is 58 However; the frequency of Ka X-ray from cobalt is less than the frequency of K X-ray from nickel. Thus, Moseley rearranged the sequence as Co, Ni instead of Ni, Co. Similarly, several other rearrangements were made. We can understand Moseley’s law qualitatively from Bohr’s atomic model. Consider an atom from which an electron from the K shell has been knocked out. Consider an electron from the L shell which is about to make a transition to the vacant site. It finds the nucleus of charge Ze screened by the spherical cloud of the remaining one electron in the K shell (figure 44.6). If we neglect the effect of the outer electrons and the other L electrons, the electron making the transition finds a charge (Z — 1 )e at the centre. One, therefore, may expect Bohr’s model to give reasonable results if Z is replaced by Z-b with b=1.

X-rays are electromagnetic waves of short wavelengths and may be diffracted by suitable diffracting centres. However, the diffraction effects are appreciable only when the diffracting apertures are of the order of the wavelength, i.e., of the order of O nm. This is almost the size of an atom and it is difficult to construct slits with such small gaps so that X-rays can be appreciably diffracted. In solid crystals atoms are arranged in fairly regular pattern with interatomic gaps of the order of 0 1 nm. Common salt is an example of such a crystalline solid. Almost all the metals at ordinary temperature ‘ are crystalline. These metals may act as natural three-dimensional gratings for the diffraction of X-rays. The structure of a solid can be viewed as a series of parallel planes of atoms separated by a distance d (figure 44.7). Suppose, an X-ray beam is incident on a solid, making an angle 0 with the planes of the atoms. These X-rays are diffracted by different atoms and the diffracted rays interfere. In certain directions, the interference is constructive and we obtain strong reflected X-rays. The analysis shows that there will be a strong reflected X-ray beam only if 2d sinO = n λ where n is an integer. For monochromatic X-rays, X is fixed and there are some specific angles O1, O2, O3. etc. corresponding to n = 1, 2, 3,etc. Thus, if the X-rays are incident at one of these angles, they are reflected; otherwise they are absorbed. When they are reflected, the laws of reflection are obeyed, i.e., (a) the angle of incidence is equal to the angle of reflection and (b) the incident ray, the reflected ray and the normal to the reflecting plane are coplanar. Equation above is known as Bragg’s law. By using a monochromatic X beam and noting the angles of strong reflection, the interplanar spacing d and several information about the structure of the solid can be obtained.

Properties and Uses of X-Rays

X-rays are electromagnetic waves of short wavelengths. Accordingly, it has many properties common with light. Here are some of the properties of X .

Thus, they can pass through small thicknesses of aluminum, woods, plastics, human flesh etc. They are stopped by materials of high density and high atomic number. The penetrating power of X-ray has made it popular and familiar to the general public. It is used extensively to detect diseases inside the body. It passes quite freely through the flesh but is stopped by the bones. So it can photograph the bones inside the body on a photographic film. Such a photograph is called a radiograph. This is used to detect and study bone fractures due to an ‘accident. Chest radiographs are used to study diseases in lungs. Dentists also use X-ray to study teeth-decay. X-ray is also used in cancer therapy. X-ray is used in industry and material science research. It can detect structural defects, fault of joints, welding etc. X-ray machines are used to inspect suitcases, wooden boxes etc. without opening them and can be typically found at the custom, security counters at airports etc. X-ray can be used to detect diseases and to cure them. At the same time, random and excess exposure to X-ray may induce diseases. X-ray has a damaging effect on the living cells of a body which may lead to cell-death. High exposure for a long, period (say for years) may lead to cancer or genetic defects. TV, computer terminals, oscilloscopes etc. use a cathode-ray tube in which a highly energetic electron beam strikes the screen. A fraction of kinetic energy is converted into X-rays which may come out. Screens of these equipment are generally designed to absorb these X-rays.