Classification of Computers – Until recently computers were classifieds as microcomputers, super minicomputers, mainframes, and supercomputers. Technology, however, has changed and this classification is no more relevant. Today all computers used microprocessors as their CPU.

Thus classification is possible only through their mode of use.

Classification of Computers based on mode of use

Based on mode of use we can classify computers as Palms, Laptop PCs, Desktop PCs and Workstations. 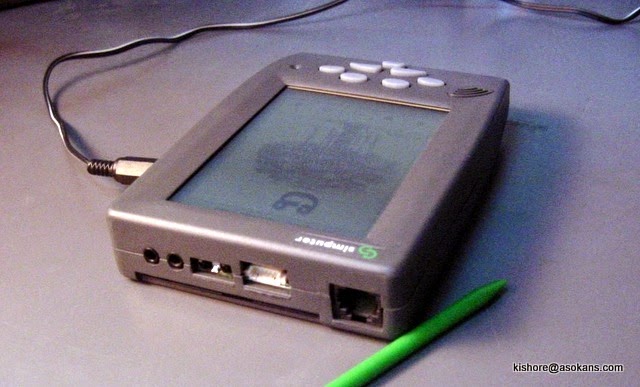 With miniaturization and high-density packing of transistor on a chip, computers with capabilities nearly that of PCs which can be held in a palm have emerged. Palm accept handwritten inputs using an electronic pen which can be used to write on a Palm’s screen (besides a tiny keyboard), have small disk storage and can be connected to a wireless network. One has to train the system on the user’s handwriting before it can be used as a mobile phone, Fax, and e-mail machine. A version of Microsoft operating system called Windows-CE is available for Palm.An Indian initiative to meet the needs of rural population of developing countries is called Simputer. Simputer is a mobile handheld computer with input through icons on a touch sensitive overly on the LCD display panel. A unique feature of Simputer is the use of free open source OS called GNU/Linux. The cost of ownership is thus low as there is no software cost for OS. Another unique feature of Simputer not found in Palm, is a smart card reader/writer, which increases the functionality of the Simputer including possibility of personalization of a single Simputer for several users.

This blog is using the Genesis Theme Framework with child theme

Laptop PCs (also known as notebook computers) are portable computers weighing around 2 kgs. They have a keyboard, flat screen liquid crystal display, and a Pentium or Power PC processor. Colour displays are available. They normally run using WINDOWS OS. Laptops come with hard disk (around 40 GB), CDROM and floppy disk. They should run with batteries and are thus designed to conserve energy by using power efficient chips.

Many Laptops can be connected to a network. There is a trend towards providing wireless connectivity to Laptops so that they can read files from large stationary computers. The most common use of Laptop computers is used for word processing, and spreadsheet computing. As Laptops use miniature components which have to consume low power and have to be packaged in small volumes.

The most popular PCs are desktop machines. Early PCs had Intel 8088 microprocessors as their CPU. Currently (2004), Intel Dual Core is the most popular processor. The machines made by IBM are called IBM PCs. Other manufacturers use IBM’s specifications and design their own PCs. They are known as IBM compatible PCs. IBM PCs mostly use MS-Windows, WINDOWS –XP or GNU/Linux as Operating System. IBM PCs, nowadays (2004) have 64 to 256 MB main memory, 40 to 80 GB of Hard Disk and a floppy disk or flash ROM.

Besides these a 650 MB CDROM is also provided in PCs intended for multimedia use. Another company called Apple also makes pCs. Apple PCs are known as Apple Macintosh. They use Apple’s proprietary OS, which is designed for simplicity of use. Apple Macintosh machines used Motorola 68030 microprocessors but now use Power PC 603 processor. IBM PCs are today the most popular computers with millions of them in use throughout the world.

Workstations are also desktop machines. They are, however, more powerful providing processor speeds about 10 times that of PCs. Most workstations have a large colour video display unit (19 inch monitors). Normally they have main memory of around 256 MB to 4 GB and Hard Disk of 80 to 320 GB. Workstations normally use RISC processors such as MIPS (SIG), RIOS (IBM), SPARC (SUN), or PA-RISC (HP). Some manufacturers of Workstations are Silicon Graphics (SIG), IBM, SUN Microsystems and Hewlett Packard (HP).

The standard Operating System of Workstations is UNIX and its derivatives such as AIX (IBM), Solaris (SUN), and HP-UX (HP). Very good graphics facilities and large video screens are provided by most Workstations. A system called X WINDOWS is provided by Workstations to display the status of multiple processes during their execution. Most Workstations have built-in hardware to connect to a Local Area Network (LAN). Workstations are used for executing numeric and graphic intensive applications such as those, which arise in Computer Aided Design, simulation of complex systems and visualizing the results of simulation.

While manufacturers such as IBM, SUN and Silicon Graphics have been manufacturing high performance workstations the speed of Intel Pentium Processors has been going up. In 2004, Pentium with clock speed 3 GHz are available. They can support several GB main memories. Thus the difference between high end PCs and Workstations is vanishing. Today companies such as SUN make Intel based workstations.

There are organizations such as banks and insurance companies process large number of transactions on-line. They require computers with very large disks to store several Terabytes of data and transfer data from disk to main memory at several hundred Megabytes/sec. The processing power needed from such computers is hundred million transactions per second.

These computers are much bigger and faster than workstations and several hundred times more expensive. They normally use proprietary operating systems, which usually provide high expensive services such as user accounting, file security and control. They are normally much more reliable when compared to Operating System on PCs. These types of computers are called mainframes. These are a few manufacturers of mainframes (e.g., IBM and Hitachi). The number of mainframe users has reduced as many organizations are rewriting their systems to use networks of powerful workstations.

Supercomputers are the fastest computers available at any given time and are normally used to solve problems, which require intensive numerical computations. Examples of such problems are numerical weather prediction, designing supersonic aircrafts, design of drugs and modeling complex molecules. All of these problems require around 10^16calculations to be performed. These problems will be solved in about 3 hours by a computer, which can carry out a trillion floating point calculations per second. Such a computer is classifieds as supercomputer today (2004).

Recently applications of supercomputers have expanded beyond scientific computing, they are now used to analyse large commercial database, produced animated movies and play games such as chess.Besides arithmetic speed, a computer to be classified as a supercomputer should have a large main memory of around 16 GB and a secondary memory of 1000 GB. The speed of transfer of data from secondary memory to the main memory should be at least a tenth of the memory to CPU data transfer speed. All supercomputers use parallelism to achieve their speed. In Sec. 12.9 we discuss the organisation of parallel computers

Further Reading on Classification of Computers by Purpose of use